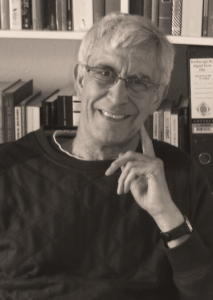 An accomplished writer with numerous publishing credits, Mark P. Henderson attended Edinburgh Medical School and currently runs a one-man business, editing medical and scientific papers and occasionally fiction manuscripts. For    several years he edited an online medical/scientific journal, a task he recently relinquished to allow himself more time for writing and storytelling. He resides in the Peak District of Derbyshire, about twenty miles from Manchester, England. He enjoys traveling the Peak District countryside collecting and telling local folktales. Often, when    asked his age, he replies, “I’m ancient. Carbon-14 dating would yield surprising results.”

Mark took up writing fiction pieces around the turn of the millennium (the most recent one).  A collection of short stories “Rope Trick: Thirteen Strange Tales” was published by Ash Tree Press, British Columbia, in 2008; one story in that collection was a reworking of a Peak District folktale. His first full-length novel “Perilaus” was published in 2009. In addition, his fairy tale spoof “Fenella and the Magic Mirror” was e-published by Gypsy Shadow Publishing early in 2010. Mark’s historical analysis of one Peak District legend “Murders in the Winnats Pass” was released by Amberley Publishing in August 2010, and his collection of traditional stories “Folktales of The Peak District” was released by the same publisher in 2011.

Mark is currently completing another novel and assembling a collection of convoluted puns, which he hopes to inflict on the public before long.