Back in Brontë country


Yesterday, the day after my outing to Longnor, I drove two hours north to Howarth, famous as the home of the Brontë family. I’d been invited by the local group to do an evening’s storytelling; a good gig in the informal setting of the Old Hall Hotel, which I described in a blog about four weeks ago. But I left home at lunchtime so I could reach my destination in time to visit the Old Parsonage, now the Brontë museum, before it closed for the day.

Museums dedicated to famous literary and other figures are often devoid of atmosphere. They have interesting exhibits,sensitively displayed, and they’re informative, but you seldom feel you’re ‘making contact’ with those whose memories they’re designed to celebrate. The Brontë museum is different. At least, it was for me – possibly because, a mere nine days ago (see last week’s blog), I’d spent a glorious afternoon at North Lees Hall, the antetype of ‘Thornfield’ in Jane Eyre. Yesterday at the Old Parsonage Museum in Howarth I could sense the lingering presence of the three literary sisters and their talented but feckless brother, Branwell, and of their father Patrick. The Brontë Society have done them proud, and themselves proud: so many original manuscripts, so many quotations from the works, so many of Branwell’s drawings and paintings, so many personal items to generate a feeling of intimacy with the past.

The Parsonage itself is a fine Georgian house: 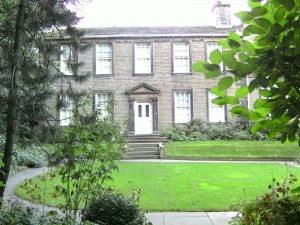 In the garden is a sculpture depicting (left to right) Anne, Charlotte and Emily: 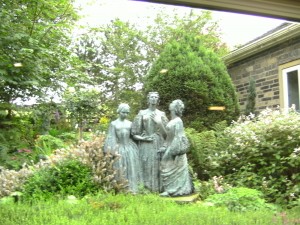 And directly opposite the building, across the narrow lane past the church at the highest part of the town, is the Old School Room in which the children were taught – and was the location of Charlotte’s wedding in 1854, the year before she died during the early stages of pregnancy: 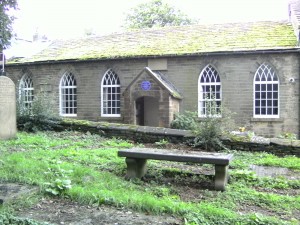 Here’s a detail of the blue plaque above the porch: 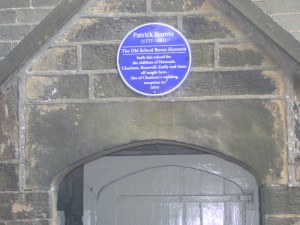 After the museum closed, I walked a few yards to the Black Bull Inn, said to be one of the most haunted inns in England, where poor lovesick Branwell steadily drank himself to death. It seemed the right place to dine before my evening gig.

As for the gig itself, it seemed to go well, to judge from the comments relayed to me afterwards (and from the fact that I sold a few copies of my book and CD of Peak District folktales). But oh boy, did they make me work for it! I was on my feet telling stories for two hours, and anyone who’s done a storytelling performance will tell you how tiring that is. It was half past ten before I made my escape and began the two hour drive back home.

It was a great day, but the wealth of impressions it had given me and the powerful impact of the Brontë museum, not to mention the buzzing of the mind that always ensues after a storytelling gig, kept me awake for much of the night.

I’m tired today. But I wouldn’t have missed my visit to Howarth for anything.

← “Blood out of stone” – the smell of rain
Village Walks →