In the footsteps of Charlotte Brontë


Yesterday (10th September) was the start of the North Lees Hall Heritage Weekend. Since North Lees is rarely open to the public and the activities included a creative writing venture entitled “Take your Imagination for a Walk”, I went along, together with my fellow-authors Margaret Holbrook and Pamela Turton. We joined six others, plus the tutor, Alison, who works for the Peak District National Park Authority. (Let me note in passing is that I was the only man in the group. Why are such activities always female-dominated?)

North Lees Hall was the prototype of Thornfield in Charlotte Brontë’s Jane Eyre. During the summer of 1845, Charlotte stayed at the parsonage in Hathersage; the vicar, George Eyre, was a friend of her father, and Charlotte went for many walks around the area with Mr Eyre’s daughter. One of these walks was the two-mile uphill hike to North Lees, which lies under the shadow of Stannage Edge, and impressive rock formation now very popular with climbers. “Thorn” is a simple anagram of “North”; “Field” has the same meaning of “Lees”; and as if the word games weren’t enough to confirm the identification, read the first description of Thornfield Hall in Jane Eyre and then look at the following photograph of North Lees: 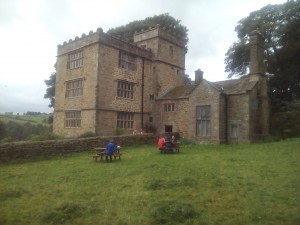 Not much doubt about it, is there? You can’t blame Charlotte for being inspired by this remarkable building and the wild, beautiful landscape around it.

As for the name of her protagonist/heroine, not only was her host in Hathersage called ‘Eyre’, but North Lees is one of the seven halls built for the seven sons of the mediaeval landowner Robert Eyre, all intended to be visible from his seat at Highlow, on the far side of the Hope Valley. From the roof of North Lees you can look towards Highlow (not actually visible in this photograph – trees have grown since Robert Eyre’s time): 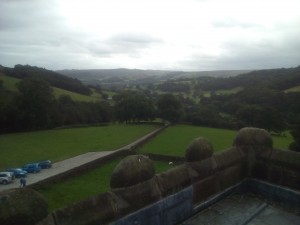 While I was up on the roof I also took a photograph in the other direction, over the garden, towards a table where Margaret and Pam were enjoying tea, coffee and cake with our tutor Alison: 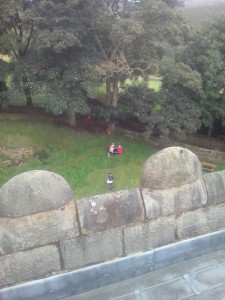 As for the interior of the building, which is almost never open to the public (this weekend was special), the atmosphere is at once elegant and homely. Among the photos I took was this one of the master bedroom with its four-poster bed. Through the door on the right you can just see the elmwood staircase, which is original with the hall… sixteenth century. (There was an earlier building here, probably the mediaeval one built for Robert’s son Thomas, but all the Eyre halls were rebuilt or replaced in situ during the late Tudor or early Jacobean periods.) 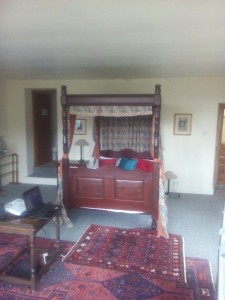 As for the creative writing part of the afternoon, all nine participants enjoyed it; all ten, I should say, because Alison obviously got a kick out of it as well. We explored the hall grounds, the ancient drove road down to the stream, the ruined mediaeval chapel and the site of the holy well, the remains of the paper mill beside the stepping stones over the stream, the millpond… the flora, the whole landscape… and we each wrote a ten-minute piece encapsulating our responses to the experience. Needless to say, the nine “students” produced nine quite different pieces of poetry or prose. My effort was a free-wheeling piece that could, I suppose, be a fragment of a novel. I’ve no idea what the novel would be about, but re-reading the words I’d scribbled, should I be surprised that it looks like a fragment of Gothic romance – aware as I was of following in Charlotte Brontë’s footsteps?

She stumbled to the ruined chapel, mind grey as stratocumulus, sunlight trickling through gaps in her memory like springs vanishing into limestone depths. The brow of the ancient land was furrowed. The breeze questioned the oaks and beeches, bearing the songs of finch and wheatear, the brown-green aroma of ageing bracken, the magenta scent of ling.

She touched the stone. Under her hand it felt like lichen, and the lichen had absorbed the spirit of the stone to which it clung. Ivy-leaved toadflax grew, and wall rue, and there were mushrooms.

She crossed the peat-laden stream by the stepping stones, past the ghosts of walls where the paper mill had stood, up to the millpond. Two mountain streams tumbled into it, bearing recollections of Bronze Ages forests and millennia of sphagnum from the high moors. The pond’s surface was brown and still and it reflected nothing but the overhanging oak and hazel, alder and birch, the maidenhair ferns lining its bank. It was not a mirror, not the mirror in which she’d seen his face.

Beside the millpond’s outflow a submerged log slumbered, appraising her. She turned to confront a rowan, its berries like a drooping sunset.

Who was he? Why had they told her to go to the Holy Well in her search for him?