On Friday (4th March) I planned to go to the Matlock Storytelling Cafe as is my wont on the first Friday of the month. Friends were performing, it’s always fun, and Helen makes wonderful cakes – which she insists are zero calorie. (Well, she’s a professional storyteller.) But my intentions were thwarted. Now we’re in Spring, metereologically speaking, the weather has achieved what it failed to achieve in January and February. At eight o’clock on Friday morning, this is what my garden looked like:

And close by in the village the scene was not dissimilar: 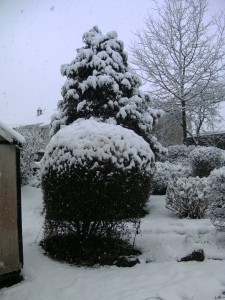 Suffice it to say that neither I nor any of my neighbours (except the ones with huge 4×4 vehicles) could drive anywhere, certainly not all the way to Matlock. Plan abandoned. Instead, I read some of John Lanchester’s Capital, listened to music, and redrafted the ghost story I plan to submit to the National Association of Writing Groups competition some time during the next week or two. Hey-ho.

The snow is still with us, to the delight of the fat dog, who caused me to throw snowballs for him to chase when I took him for a walk this morning (Sunday). It’s the first time in more than a year that he’s had the chance to chase snowballs, but he ran to the spot where he’s always found it most fun – a small hill past the hospital, where I’m required to hurl wintry missiles from the path at the bottom of the hill to the gorse bushes at the top while he races after them in persistent, repeated and always vain efforts to catch them and savage them to death. He always ignores the spot when there’s no snow on the ground, but when there is… Long-term memory in dogs again: he recognized snow and knew where to go to elicit maximum enjoyment – and make sure I was more intensively exercised than he was.

The rest of the weekend has gone according to plan, though. I spent Saturday morning and afternoon with another two dozen members of the Glossop Guild in a discussion of Ishiguro’s The Remains of the Day, comparing that wonderful novel to the scarcely less wonderful film thereof, and it was a joy to share recollections of the tale with fellow-enthusiasts. Then in the evening we had the Glossop Concert Society’s top-notch performance of Schubert’s Die Winterreise, accompanied by a slide-show of appropriate paintings (some by local artists, and very good they are) and a surtext for those – most of the audience – who aren’t fluent in German. We’d done pretty well to lay on weather conditions appropriate to the music and the artwork.

Today, Sunday, after the fat dog’s snowball hunt, I went into Manchester with my fellow-authors Pamela Turton and Margaret Holbrook – we’re the trio who do the “Meet the Authors” sessions, the next of which will be in Chapel en le Frith on the 16th of this month – and spent most of the day at Elizabeth Gaskell’s house, which has been lovingly and tastefully restored and is not only full of interesting exhibits and memorabilia but also has a delightful atmosphere. It feels like a family home where you’re a welcome guest. The volunteers who run it are informed, enthusiastic and delighted to share their knowledge with visitors. We all enjoyed ourselves.

Margaret, Pam and I had met on Thursday eveing at the Globe to discuss possible future “Creative Focus” plans. We’ve had a break from arranging ventures since we finished the Snow Queen performances, which were exhausting. However, Pam came up with a neat idea: let’s do a new pantomime for Christmas 2016, get the children involved from the outset, and let them choose what characters they want to be – then create a script to go with their choices, with their collaboration. Of course, the proposal set my mind free-wheeling, and this afternoon, in the tea room at Mrs Gaskell’s house, I regaled my two colleagues with ideas about a version of Snow White updated for the age of social media. I had an image of the wicked queen (more probably the wicked second wife of a deceased banker who’s left everything to his daughter by his first marriage… or something like that) – anyway, I pictured her with a selfie stick intoning Smartphone, smartphone on a stick, Whose is the fairest profile pic? No doubt Snow White – or Melanin-Impoverished in this modern, politically correct version of the tale – will be drugged, taken out of the mansion, and dumped in an alley in the city slums, where she is found and protected by seven diminutive asylum seekers… I think something can be done with this fantasy, but maybe not right now.

Okay, that’ll do for this week’s blog. I think I’ll have another look at the draft ghost story before bed time. Then I’ll feel I’ve been creative. Sort of.

← The Migrant Crisis
Ever decreasing circles →