Lincoln is a small but interesting and attractive city, full of historical and archaeological interes. Numerous prehistoric remains have been excavated in the area; it was a Roman town; it was rebuilt by Danish settlers in the 10th and 11th centuries; and after the 12th century it became the centre of the biggest and richest diocese in England, making the Bishop of Lincoln a wealthy and powerful man. The city played important parts in the civil wars of the 12th and 17th centuries and was pivotal in the battles that raged around the time of Magna Carta; indeed, one of the four surviving original copies of the Magna Carta is housed there, along with one of the two surviving copies of the Forest Charter of 1217.

And I’d never visited the place. I knew about Lincoln only by reputation. So I decided it was time to rectify the matter.

Lincoln is a four hour train journey away from where I live. I arrived early Wednesday evening and made my way – through pouring rain – from the station to the place I’d booked to spend the night. I found a good restaurant and had dinner, walked around and explored a little after the rain had eased, and resolved to explore more thoroughly on Thursday.

To my pleasure, Thursday dawned bright and cloudless. Immediately after breakfast I went to spend an hour and a half looking around the cathedral (mostly 13th century) – the carvings around some of the doors testify to the magnificence of the workmanship in the building: 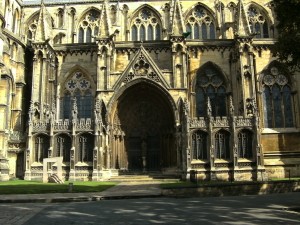 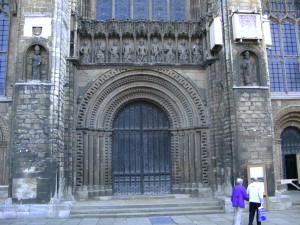 And I happened upon the house inhabited by John of Gaunt, the powerful 14th century Duke of Lancaster, father of King Henry IV. John of Gaunt’s notorious wife, Katheryn Swinford, is buried in the cathedral. I hadn’t realised that John and Kathryn had lived in Lincoln! (Their house is the dark red brick structure with the oriel window): 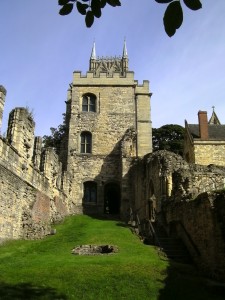 As for the castle, the high point (literally and metaphorically) is the mediaeval wall, which extends for about one third of a mile around the site and encompasses both the Norman mottes on which the earliest castle buildings were constructed. Some parts of the wall incorporate Roman brickwork, with its tell-tale herringbone pattern (look at the left hand side of this picture): 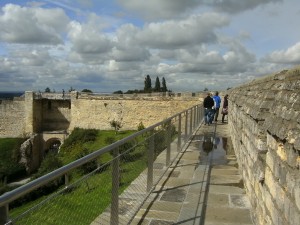 And the eastern part of the castle wall, where a tall observation tower stands on the second of the Norman mottes, affords perhaps the best possible view of the cathedral, just a couple of hundred yards away:

Altogether a memorable visit. I can now declare that I’ve been to Lincoln – and appreciated at least some of the riches it has to offer.

On the train journey there and back I occupied myself by reading Margaret Foster’s The Memory Box. It’s a surprising and rewarding novel, a journal of exploration of self and relationships by the narrator, made gripping by the air of mystery surrounding her long-dead mother. I didn’t altogether like the writing style but I loved the story, which is very well thought out and doesn’t lapse into easy solutions. I suspect my memory will now link Foster’s book with my own exploration of Lincoln, enriching both experiences.

← Islamic State and Prejudice
In a copper mine →