In a copper mine

The Ecton Copper Mine is one example, or was until last Wednesday (19th August). It’s in the south-western part of the Peak District, over the Staffordshire border, not far from Ilam. It lies beneath Ecton Hill, which climbs between the Dove and Manifold valleys and affords splendid views over the surrounding countryside (even in the dismal weather we had last week).

Ecton Hill is one of only two places in England in which copper is known to have been mined during the Bronze Age (the other is Alderley Edge, not far away, in Cheshire); Wales boasted the Great Orme mine, which was quite a lot richer, but England wasn’t well supplied with this most important of metals. We did, however, have tin – mostly in Cornwall, in the extreme south-west of the country – an essential ingredient of bronze so valuable that traders from as far afield as Phoenicia (modern-day Lebanon, more or less) sailed to these shores to strike deals for it.

Ecton Hill is limestone country, but in the late Carboniferous era, after the limestone had been formed, it was overlaid with a hard and mineral-rich sandstone known as millstone grit. (Yep, this was traditionally used for making millstones.) Over millions of years, the millstone grit was eroded away from what is now the White Peak, but by then the minerals had been leeched from it into the porous limestone, where they formed veins of ore. The best-known of these veins were lead ore (galena, lead sulphide), with small amounts of zinc, silver and manganese deposits; but at Ecton, uniquely, they were mainly copper. A substantial deposit of chalcopyrite was formed in the depths of the hill, down to around 1000 feet below the surface, and in the higher parts of the pipe, exposed to the air, the chalcopyrite was converted to malachite, the copper ore with a tell-tale green colour.

Not until the 18th century was Ecton Hill mined for copper on a serious commercial footing. The 5th Duke of Devonshire, who owned the land (and indeed most of the Peak District), made a huge profit from the mining venture; his famous wife Georgiana gambled away much of this profit. Now the National Trust has taken over the main parts of the site and on Wednesday I joined a party of visitors who had the opportunity to walk around those parts of the mine that remain above water; for like all deep mines, Ecton is largely flooded. It was fascinating to see the tracks of the tramways on which the crude ore-bearing rock was carried out to the dressing floor for refinement, the remains of the triangular drill holes into which black powder had been packed prior to blasting, the shafts by which ore was lifted to the surface, and the site of the pumping apparatus by which at least some of the water was expelled so that deeper parts of the ore deposit could be exploited.

Close to the top of the hill is the shed that had contained the pumping engines. 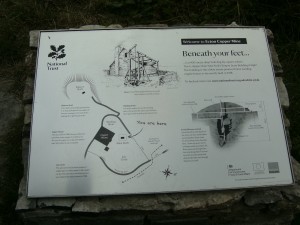 The first of these engines was the old Newcomen-Savery type, which executed about one stroke per minute; it worked, but not efficiently. Then, in 1788, a new engine was installed: only the second Boulton-Watt beam engine ever to be built. Watt’s innovations (not least the separate condenser) made this machine much more efficient than its predecessor – twenty-five strokes per minute.

It was the Boulton-Watt engine that drove the beginnings of the industrial revolution, and it was, in effect, trialled right her, at Ecton in the Peak District. Here’s a facsimile of the original blueprint: 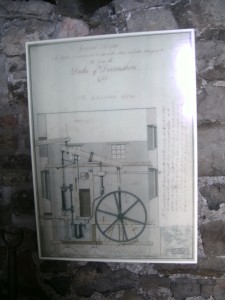 Ironically, the Ecton copper mine ceased to yield an economically worthwhile quantity of copper ore in 1790, just two years after this epoch-making engine had been installed; and the engine itself is long gone. But the shadow of its presence lingers. At Ecton,as in so many parts of the Peak District, history becomes tangible.

← Lincoln
Back from the Deep South →