Eyam Hall is one of several 17th century manor houses in the Peak District. It’s a little more recent than most of the others (it was completed and first occupied in 1672, six years after the ending of the plague) but architecturally it’s similar. John Wright of Eyam built it for his son John and John’s wife Elizabeth, and the Wright family have lived in it ever since. Eighteen months ago the current owners leased it to the National Trust so it could take in paying visitors, but it’s still their house (and they live in another property in the village, keeping an eye on the ancestral Hall). 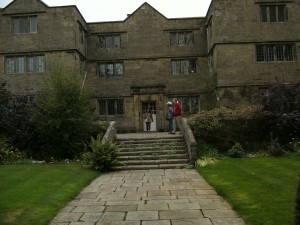 Among the many delights of the Hall is the main staircase, a three-storey structure of dark oak with ball fineals and perforated pendants at each turn – it is older than the building. It reputedly came from an older house (Bradshaw Hall) that was being demolished in the 1670s. It was less than a mile away, but consider the logistics of transporting a three-storey oak staircase on 17th century roads in a part of England that was in those days wild and dangerous – this was lead-mining territory and the lead miners weren’t all particularly civilized.

How do you carry a giant staircase over rough roads? How big a cart do you need, and how many oxen or bullocks to you need to pull it? And what do you do when you reach your destination? Hoy, staircase delivery… Where do you want it? Right, give us a hand, mate, you grab that end… Suppose the stone walls were already built. How do you get a staircase through the doorway? Or do you lower it down from the top before the roof is complete – and if so, what sort of hoist or crane will you need?

Any civil engineers out there to advise?

The gardens of Eyam Hall, incidentally, are gorgeous. They’re not at their best at this time of year but they’re still worth visiting.

← Whither the United Kingdom?
Beauty and the Plague →