Beauty and the Plague


Today, a fine September Sunday, I drove to the village of Eyam (pronounced ‘Eem’), about 45 minutes’ drive from where I live. Eyam was a lead mining village, as poor and ugly and brutal as any mining community, and in 1665-6 it was hit by the plague. Supposedly Bubonic plague (I have my doubts – the disease history and epidemiology were more like Ebola), it killed nearly half the population of the village in less than eighteen months. But it never spread to neighbouring communities because the villagers agreed to quarantine themselves.

This remarkable display of communal altruism was driven by the young Anglican curate, William Mompesson, and his older Presbyterian counterpart William Stanley. In most accounts of the Eyam Plague, Mompesson is given the credit, and indeed he was courageous and steadfast and worked indefatiguably with the dead and dying and their families, losing his beloved wife to the disease in the process. But Stanley, who had been the curate during the Commonwealth of 1649-1660 and was ejected from the living when the monarchy was restored in 1660, was loved by the villagers and there can be little doubt that his influence on the community’s decision was paramount. He no longer had an income from the church but he stayed in Eyam to the bitter end, working as diligently as Mompesson, and – remarkably – with Mompesson, for the sake of people. What price religious differences in the face of a crisis?

Here’s a picture of the 17th century cottages where the plague first appeared: 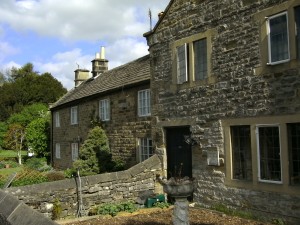 Under the direction of the Earl of Devonshire, who owned most of the land around Eyam, people from neighbouring villages left food at the parish boundaries so the beleagured Eyamites didn’t starve. The people of Eyam left money in exchange for the food gifts, boring holes in a stone boundary marker and filling them with vinegar in a crude attempt to sterilise the coins.

Nowadays, the lead mining industry being long dead, Eyam is a beautiful village in a beautiful landscape, and the dreadful events of 350 years ago make it a popular tourist destination. There’s a museum full of plague memorabilia and a stained glass window in the lovely little church tells of the main events of that time, the heroism and tragedy of a small community. Outside the church is a reminder of the long history of the Peak District, a Celtic-come-Saxon cross dating from the eighth century (yes, that’s right, think 1300 years): 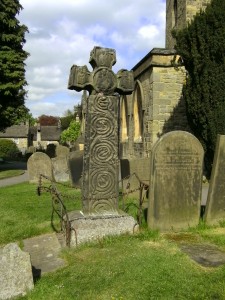 And lest we forget that times past were cruel as well as occasionally heroic, the standard punishment for those who fell from grace in their daily lives can still be discerned on the village green:

← More about Eyam
Trying to catch up with myself →