Having been furiously busy with editing for the previous three weeks I awarded myself a two-day holiday in Whitby, taking the train there on Thursday 18th April and returning on Saturday 20th. A twelve-hour day of catching up with backlog awaited me on Sunday 21st (Easter Sunday) but the break was well worthwhile, not least because the weather was glorious – unbroken sunshine and decidedly warm for the time of year.

It’s rumoured that Whitby has more visitors per annum than anywhere in England outside London, and given the crowds along the harbour, where the amusement arcades and the most famous eating places are to be found, I’m prepared to believe it. One couldn’t stir. There are good things to see along that small strip of land – Trencher’s, allegedly the best fish and chip restaurant in the U.K., with a half-mile queue outside it; a full-scale replica of Captain Cook’s first vessel, the Endeavour; jewellers’ shops specialising in the world-famous Whitby jet; a little antique shop with a dusty window and peeling brown paint bearing the inspired name Den of Antiquity – but such joys are better appreciated when one has room to breathe.

However, when I climbed the 199 steps to the Abbey (yes, I did it, though I had to rest for a couple of minutes when I reached the top!), I found the crowd much thinner. There couldn’t have been more than twenty or thirty people exploring this glorious historical monument. Founded in the 7th century by St Hild (Hilda), it was the site where the Synod of Whitby was held and the decision was made to accept the Roman Catholic rather than the Celtic Church (the most notable difference being the date of Easter), and where the illiterate cowherd Caedmon became a monk after his great poem The Dream of the Rood was recognised as the masterpiece it is. The 199 steps up to the Abbey site are called ‘Caedmon’s Steps’ in his honour, and the town boasts a Caedmon College. 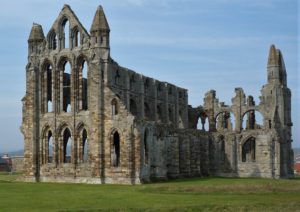 Whitby has many claims to fame. Apart from being the location of Captain Cook’s apprenticeship and long-time home, it was where Bram Stoker wrote Dracula, part of his inspiration being the “red eyes” of the reflected sunset in the windows of St Mary’s Church next to the Abbey; the view of these from his hotel window in Royal Crescent is perfect. It’s also where Lewis Carroll wrote The Walrus and the Carpenter. Dickens was another famous literary visitor. The whaler and Arctic explorer William Scoresby (1760-1829), inventor of the crow’s nest, was a Whitby man. Another of the town’s whalers brought home a polar bear as a pet. There’s a model of it overlooking the harbour, perched on what is now a wholefood shop.

While I was in the town I treated myself to a tour on the open-top bus, I joined the ghost walk on Good Friday evening, and I spent two hours each in the Whitby Museum in Pannett Park and the Captain Cook Museum in the old town. Those museums were great places to escape the crowds; no more than a dozen people in each of them, while the harbour area remained packed with serried ranks of visitors. Even the Pannett Park was quiet, a peaceful place less than half a mile from the place where the crowds are thickest.

Well, it’s great to see people enjoying themselves, whatever their preferences, provided they’re not harming anyone else; and the crowds around Whitby Harbour were having a good time. But it seems my choices of Things To Do aren’t majority tastes!

← The FIrst Glossop BookFest: July 6th, 2019
Is climate change a matter for debate? →