Premature spring lifts the spirits, and so does another publishing contract!


In most of Britain during the past week we’ve had the highest ever February temperatures. It’s been warm and sunny, more like a fine spell in May than the final phase of winter. It won’t last – a down-turn in the weather is forecast for the next few days – but it’s been great. The morning birdsong has deluded us into believing that spring has indeed arrived, though the curlews aren’t back on the moors yet; they usually reappear before the end of February. Trees are flowering – the willows by the lakeside, and the white poplar in my garden (which bears more catkins than I’ve ever seen on it) – and after a fine display of snowdrops, the big flower-bed in my garden is now a veritable carpet of crocuses: yellow, white, lilac and deep purple. 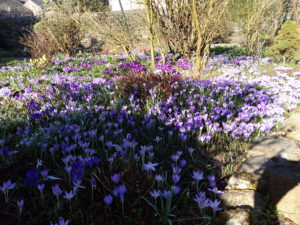 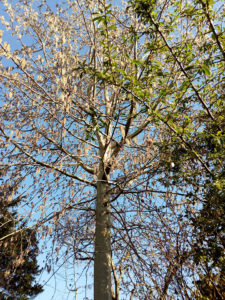 Daffodils are already in bloom around the Peak District, and even the bluebells are sprouting.

For the past few weeks I’ve been struggling through a pile of history books, trying to get enough background to start planning my intended novel about our Elizabethan folk hero, Harry Botham. I now have a solid feeling for the daily lives that he and his family and neighbours must have led through the cycle of the year, so that’s progress. On Friday I’m due to meet the current owner of the farm he once held as tenant (well, it’s not the same building, but it’s more or less on the site), which might help to ground my intuitions better. As yet, however, I can’t quite see the world through Harry’s eyes, which I must be able to do if I’m to write his story. I’ll keep working on it!

There have been other demands on me, and these have diverted my attention from the big project: manuscripts to edit, friends’ needs to address, contributions to our projected book of amusing medical anecdotes to collect and edit, meetings to attend or plan (including the AGM of our writing group scheduled for tomorrow morning, for which I’ve had to help re-jig the constitution as well as preparing my secretary’s report), a storytelling gig to prepare for tomorrow evening… It all takes time and mental effort, though I don’t find any of these demands uncongenial.

In any case, there’s been a boost to my spirits that has even outclassed the effects of the premature spring: Gypsy Shadow Publishing (Texas) has given me a contract for my spoof 14,000 word novelette The Definitive Biography of St Arborius of Glossopdale and his Thin Dog, which will appear as an e-book fairly soon. It will become available as always through the great monster Amazon and perhaps other sources. I shall of course make a public announcement when this little book is officially released!

Meanwhile, I’ve sent a surreal, out-of-left-field novella entitled The Man who Let the Cat of Doom out of the Bag (32,000 words or so) to my “usual” publisher, FBP, but I suspect it will prove too weird for them; indeed, for any publisher. Still, nothing ventured… If Cat of Doom does get accepted, 2018-19 will have been a publication purple patch, with National Cake Day in Ruritania apparently selling well, The Engklimastat due out during the summer, the novellete with Gypsy Shadow, and then the novella… If it happens it will help make up for the years when because of caring duties I had to set my attempts at creative writing aside (hence nothing except a few short stories published between 2011 and 2016), but there’s no way I’ll be able to keep producing publishable manuscripts at this rate!

← And another publication…
Where angels fear… →